Like many of the great English bands of the 60’s, The Birthday Massacre got together while attending a Fine Arts Program. Formed in 1999 by Rainbow and Chibi who were classmates at Fanshawe College in London, Ontario, they 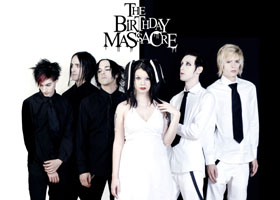 added two more schoolmates, OE and Aslan, and then one of Rainbow’s childhood friends, Falcore, to form the band. The band practiced for a year or so, many times in Rainbow’s apartment, and then made their debut in 2000 at a local club in London.

After moving to Toronto in 2001 the band released a 5 song demo and then went to work on what was to become their first album, Nothing and Nowhere. That album was released in the summer of 2002 and became an underground classic almost immediately. This album contained one of their most requested songs, Video Kid. The popularity of this song on their website and a video helped to spread the word.

Being one of the first Indie bands to take advantage of the internet, their reputation grew rapidly because of their excellent website.  One of the hallmarks of The Birthday Massacre has been their use of technology and during their time in Toronto, besides developing a remarkable website, they made several videos with Producer Steve Jones and released those on a DVD. The use of these relatively new methods of promotion by an Indie band continued to expand their reputation.

The band played live sporadically while concentrating on their songwriting and recording. In the summer of 2004 they released their 2nd album, Violet and then hit the road to promote the record. Although the shows were not huge successes, the people who did turn out became ardent supporters and helped to spread the word. The band came to the attention of a German label, RepoRecords and their album Violet was released in Europe. In 2005 the band’s reputation took another leap forward as a result of an excellent video Produced by Dan Oullette of the song “Blue” from the Violet album. 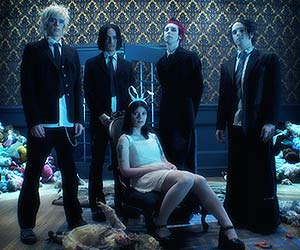 Their product was picked up for North America in 2005 by Metropolis Records and in 2006 they made a major tour of Europe that saw them at several festivals. Like many Indie bands who have success, after the end of the European tour, they found themselves in a difficult financial position but with a very loyal following. They had begun writing the songs for their new album in the fall of 2006 when they decided to add management in the hopes of resolving some of their problems.

With new management in place, the band was able to concentrate on writing and recording their new album, Walking With Strangers, all through the winter months of 06 /07.  They contacted a Producer / Engineer that they had great respect for, Dave Ogilvie, and after listening to their works in progress, he enthusiastically agreed to work with them. During May and June of this year the finishing touches were put to the album at Orange Studios in Toronto and The Warehouse in Vancouver.

While many of the members have changed over the years, the core of the band has remained constant with Chibi on vocals and Rainbow and Falcore on guitar. OE, who had left to pursue his own projects is now back on Bass and O-EN is on keyboards and Rhim is the drummer. Presently, The Birthday Massacre is on the verge of major international success thanks to the vision and hard work that they began as Fine Art students eight long years ago.